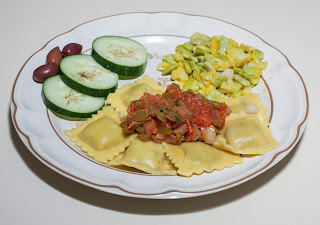 We have a new store that opened near our house last week called Sprouts; we visited and found it doesn’t have the variety and quality of coops or Whole Foods Market, but it’s nice that it’s nearby so we may occasionally visit. They had a few products we’ve not seen elsewhere, such as Lightlife brand vegan “sausage” ravioli that I picked up and decided to make today. It’s not particularly healthy as it has 16g of fat and a long list of ingredients, but I thought we’d try it. (It turns out it had soy which my wife is a bit intolerant of, so I prepared some pasta instead for her but used the same sauce, side dish, and salad for her.)

I made a homemade sauce by sauteeing chunks of just-ripe but firm tomato, bell pepper, garlic, and onion, and mixing in oregano, salt, and black pepper when off the heat. I don’t often make tomato sauces – this one was good!

I put, in this order, onion, garlic, frozen cauliflower, and frozen baby lima beans into a large Saladmaster stock pan.
I cooked waterlessly – i.e., I covered the pan and heated it on medium high until the vapor release started jiggling, then I reduced the heat to low till the jiggle stopped. I let it cook for about 15 minutes, then I mixed in a little salt, black pepper, and garlic powder.

My daughter loved the ravioli. We all loved the sauce. The side dish was fun – it was soft and seemed to melt in the mouth, and had nice flavor.

I don’t know why I don’t cook with cauliflower more often. It’s versatile and cooks down nicely to serve as a “supporting character” for other ingredients.