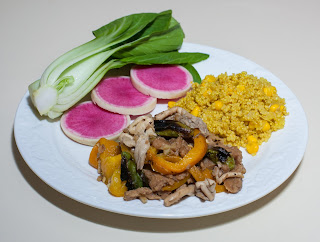 Yesterday we bought of yummy items from the Carrboro, NC Farmers’ Market, including fresh bell peppers. They have a wonderful deal that if you buy at least two pounds of any kind of peppers, they will fire roast the peppers right there for you, which is what we did. These roasted peppers are so good, and as they cooled in the plastic bags that they put them in, some liquid accumulated, which I ended up using in today’s meal. I also got great oyster mushrooms, baby ginger, a new variety (to me) of heirloom apple, baby bok choy, watermelon radish, Sugar Baby watermelon, elephant and regular garlic, white kale, and more. I used a lot of the ingredients in today’s meal.

I also made some quinoa with corn and served some slices of watermelon radish (sungold tomatoes instead for my daughter).