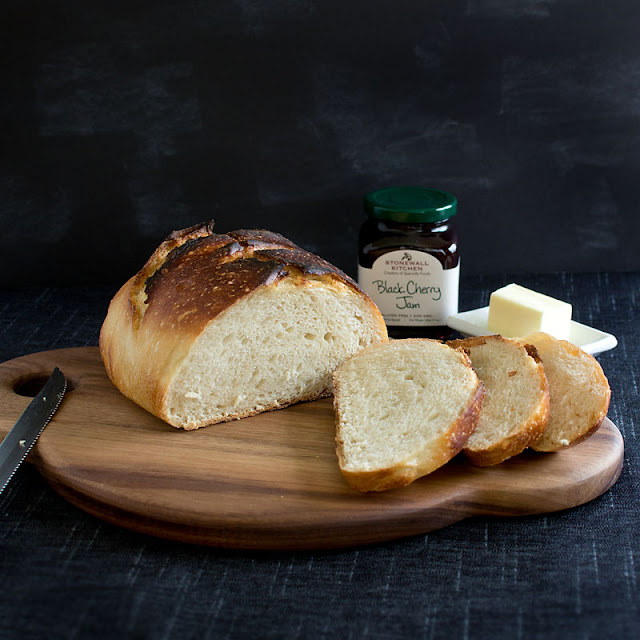 I have finally overcome my fear of sourdough starter and making sourdough bread!  This past summer, I ordered a sourdough starter from a seller on Etsy. The starter arrived in dried form, ready to have water and flour added to begin the activation process.  Then, a broken wrist aborted my sourdough plans.  A few weeks ago I found the envelope with the starter packet and decided to see if it was still good.  I’ve been feeding it according to the excellent directions that I received from the seller plus finding other tips online to keep it healthy and active.  And healthy it is!

Now I was finally ready to bake sourdough bread, but what recipe to use? I viewed countless recipes online and those included with my starter.  Then, I found one that used a spin on the the no-knead format and I
knew that would be a great recipe for a beginner to use.

The starter was prepped and mixed with flour and salt, covered and left on the counter overnight.  The next morning, I was amazed to find a beautiful rise had occurred in my dough – without any yeast, just the magic of the live sourdough starter doing its thing.

After tucking the dough under and giving it two letter folds with oiled hands, I plopped it into my small enameled cast iron oval dutch oven and covered it for another two hour rise.

Using the standard no-knead instructions that you may already know, the dutch oven was heated in a hot oven, the dough placed in the heated pot, parchment and all, and later, out came this gorgeous loaf of bread… 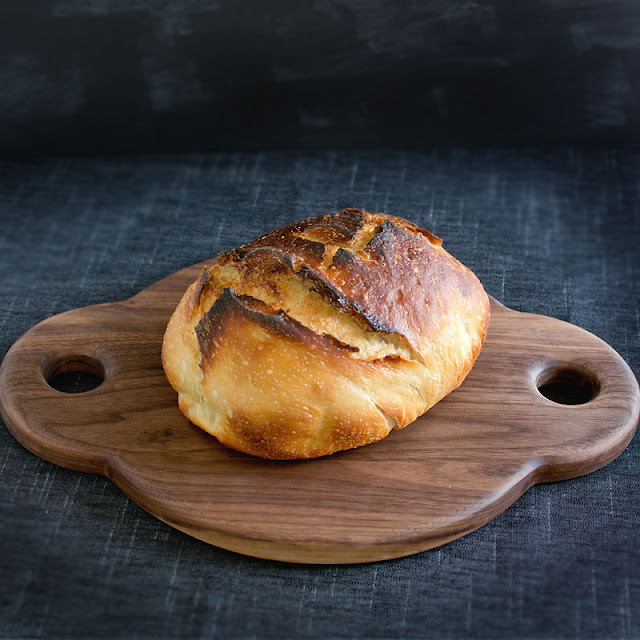 It did get a bit too brown on top but I followed the directions exactly instead of taking a peak into the oven a littler earlier.  Lesson learned. I was so excited to see how would it look inside that crusty exterior and most importantly, how would it taste? 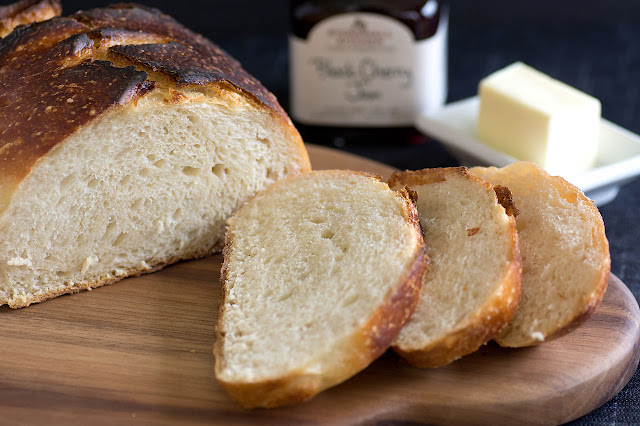 After the first bite into the shattering, crisp crust and soft, sourdough-infused interior I was so amazed and delighted that I wanted to yell, “Look what I have created!”, just like Tom Hanks in the movie “Cast Away” when he finally made a fire. 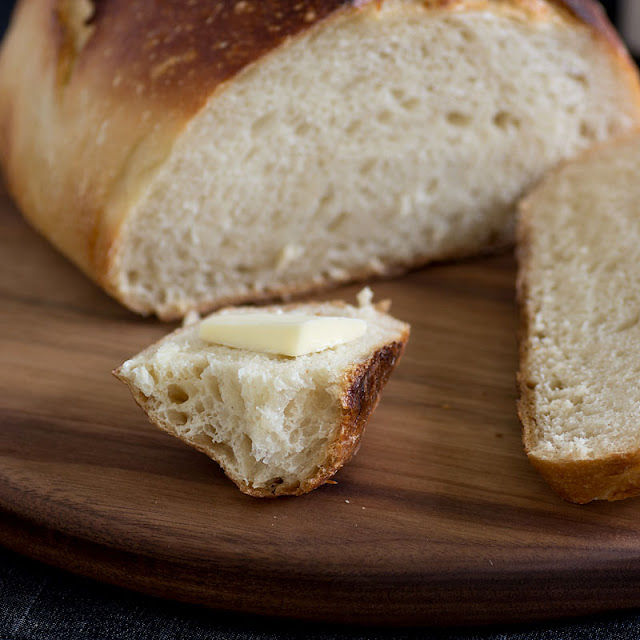 Yesterday, I made two more loaves.  Another regular sourdough loaf and a cranberry walnut sourdough, using a portion of starter that I had been feeding with rye flour. 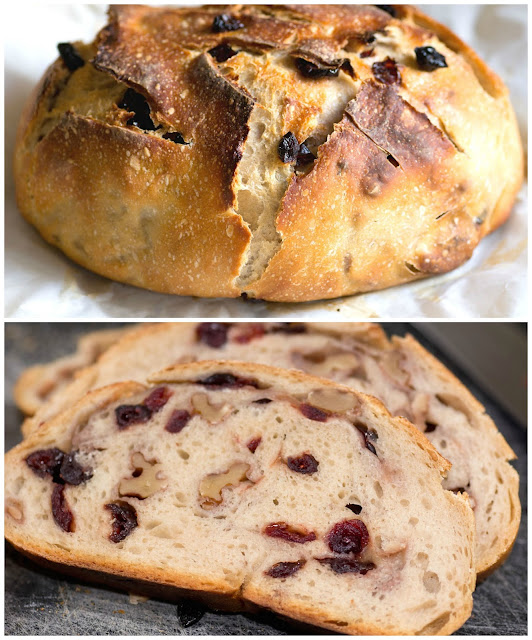 The latter didn’t rise quite as well as the regular bread flour version
but it was so delicious that I will be working on perfecting this recipe
– perhaps with a whole wheat flour starter rather than rye.

Even though it’s too late to get a starter going and make this bread for Thanksgiving, if you love to bake bread as I do and want to try nurturing a sourdough starter, this is a great recipe and a fun project for the winter months.

In the meanwhile, I would like to wish all of your who celebrate Thanksgiving this week a very happy and safe holiday!  Coincidentally, this is what wandered through our yard early yesterday morning! This is only the second time we’ve seen turkeys in our yard and both times it was right before Thanksgiving. Are they trying to tell us something? 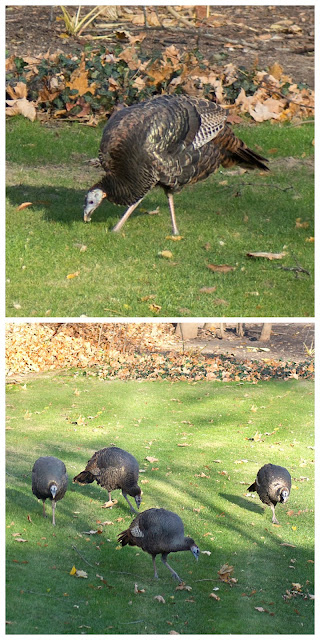 In
the morning, remove your sourdough starter from the refrigerator (where I keep mine).  Remove 1/4 cup of starter and place in a small bowl or jar. Feed it with 1/4 cup
of AP flour and 1/4 cup of room temperature water.  Stir and cover
loosely with plastic wrap.  Keep on the kitchen counter until late
afternoon.  Check to make sure it has bubbles and has increased in volume slightly
(active).


In the afternoon, weigh the flour and place in a large bowl with the salt.  Stir to combine.

Measure
out 1/4 cup of starter into a 2 cup measure.  Add enough slightly warm or room temperature water to make 1-1/2 cups total liquid.  Stir together until blended.


Pour
the starter-water mixture over the flour and mix together with your
hands or a large spoon, until no trace of dry flour remains.  You may
need to add another tablespoon or so of water if your kitchen is dry.  Cover
the bowl with plastic wrap and then a kitchen towel and allow to rest
and rise overnight on the kitchen counter, about 12 to 18 hours.


The next morning, prepare the dutch oven by placing a large piece of parchment paper over the non-handle sides and then pushing down along the bottom sides and folding back over the top sides, created creases where needed.  This will be your ‘lifter’ and also create a non-stick surface in your pot when baking.  I use a small, 3-1/2 quart Le Creuset oval Dutch oven but any small enameled cast iron Dutch oven will work.

By now, you should have a good rise, hopefully doubled in volume.
With lightly oiled hands, fold the edges of the dough into the center,
all around.  Then, pick up the dough and pull it into a rough rectangle
and fold one end over the other (an envelope fold) and then repeat with
the opposite sides.  Tuck any rough edges under and place the dough into
the prepared parchment-lined dutch oven.  Cover again and allow to rest
for two more hours.

30 minutes before the 2 hours is
up, remove the dough from the dutch oven and place it into another container temporary. (I used a rectangular plastic storage container but you could also use a casserole dish or glass bowl) Place the dutch oven with the cover on in the oven and preheat to
450F.


When the oven has preheated for
30 minutes, very carefully remove the Dutch oven and take off the top with oven mitts. Place
dough in it’s parchment carrier into the hot dutch oven. Your may
slash the top of the dough with a sharp knife if you wish but it is not
necessary. (I’ve done it with slashing and without). Put the lid back on (it’s HOT), and place the dutch oven back into the oven and bake for 30 minutes,
covered.


After 30 minutes, remove the lid and
continue to bake for another 20-30 minutes, or until dark brown on the
top.  Watch carefully during the last 10 minutes making sure the crust
doesn’t burn. When bread is done, it should be about 190 degrees F if you have an instant read thermometer.


Remove pot from oven and carefully
remove bread by lifting it out with the parchment paper.  Allow to cool
completely before slicing.

October 31, 2020
A Sourdough Story Of Sweet Friendship During Covid

A Sourdough Story Of Sweet Friendship During Covid