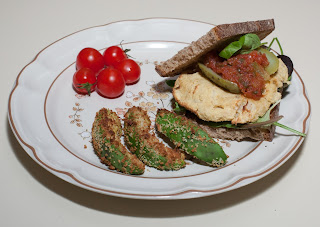 I have been thinking for a while of buying a soymilk maker and just bought the SoyaPower G4. (I also bought but didn’t open their tofu making kit; I’ll try it in the near future.) I opened the box last night and today made my first batch of soymilk; it was good though a bit thin, so I’ll try again with more beans.

As part of the process, okara (soy pulp) is generated. It was a very light brown/off-white color with the consistency of thick oatmeal. I thought I’d make okara burgers for my daughter and me (and serve a non-soy burger to my soy-intolerant wife). I took the okara from a cup of soybeans, mixed in about 1/4 as much whole wheat pastry flour and the same amount of nutritional yeast, plus about the same amount of onion, chopped into 3/8″ cubes, plus a pinch of salt, and made into two balls. I flattened them and put them in my air fryer. I baked at 350°F for six minutes to let the inside get cooked somewhat, then air fried for 5 more minutes also at  350°F.

The other fun new item I made was “avocado fries”. I simply cut avocado slices, dragged them through some panko bread crumbs and salt, and air fried for 5 minutes at  375°F.

My wife and I liked the avocado fries, but my daughter didn’t. I took some over to a neighbor who also liked them. I thought that they were a bit too rich; one or two slices would have been enough maybe mixed into a salad. I liked how the inside of the avocado was softened by the cooking experience, almost like roasted garlic becomes. The okara was good but a bit bland. But it’s exciting to see that I started with soybeans and water, and ended up with soymilk (and hot chocolate!), okara burgers, and a batch of soy yogurt (with a little of the previous batch as starter) underway.

A panko coating for the burger would have been good, especially if I didn’t have other breaded dishes with the meal. I should also try making okara burgers with other ingredients mixed in, such as greens and chunks of vegetables. If I’m going to be making my own soymilk, I need to come up with more okara ideas and hope that I don’t end up having to compost much of the nutritious okara that is a by-product of the soymilk (and tofu) making.