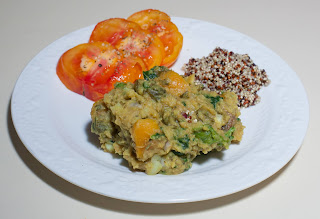 I wanted to explore another beet recipe today and thought of embedding beets in a thick dhal. I made the dhal and beets separately in my pressure cooker.

This came out well though I preferred the beets with beans that I had made a few days ago. The beets were so delicious – I should cook beets more often! I’m glad that they were well done and soft.

Carrot would have gone great in this dish. If I had beet greens (I actually do have some but want to have them last till this Saturday’s show), they would also be good. Using red beets would add a nice contrasting color, but I definitely prefer the sweeter flavor and much less staining of golden beets. I should make beets more often; they’re easy, with these tips:

You don’t have to remove the skins until you’re done cooking. The skins slip off easily once cooked, like I described here.

Labels: Gluten Free, Instant Pot, Kale, Lentils, No Added Fat, So Many Cooks in the Kitchen