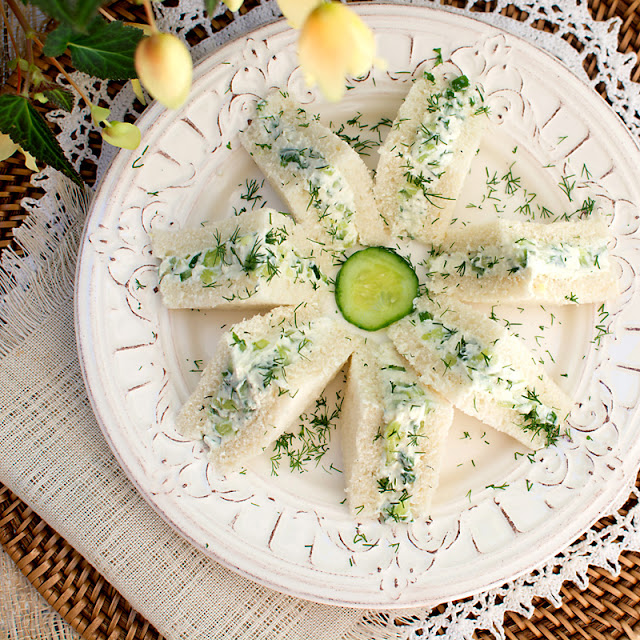 We all say this but “Where did summer go?”!  I hope you don’t mind me holding on just a bit.

It’s always a shock when it’s Labor Day and then the first day of Fall arrives. Granted, I missed a few weeks of summer enjoyment due to my injury, but I always got outside to inspect my garden and pick a tomato, cucumber or flower here and there, even with one hand 🙂 Here in SE Wisconsin, we have been having gorgeous September weather.  It has been in the 80s this week, and reached 89F on Monday.

I’m still picking 2 or more cukes a day, which is down from 4-5 a day earlier this month. I’ve been
blessed with a bumper crop from my small planting area. I planted seeds of a new variety this year that I ordered from Burpee called “Iznik
Hybrid”.  It’s been a
wonderful producer with delicious, thin-skinned cucumbers. I trained the vines to grow up a fence with velcro plant ties. 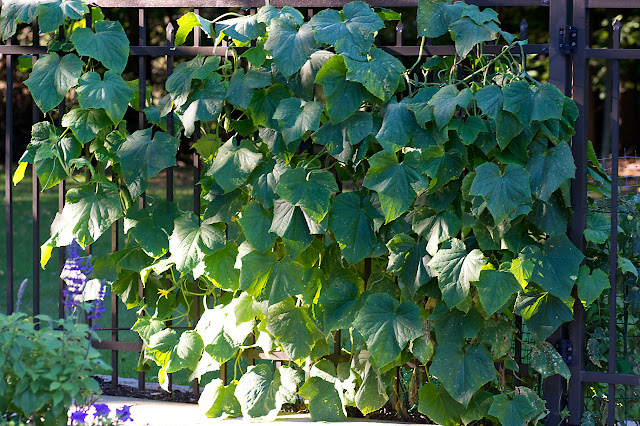 I’ve used cucumbers for my favorite Refrigerator Pickles and also in umpteen salads but I really needed more ways to use them so they wouldn’t go to waste.  I’d like to bid farewell to summer with these recipes using cucumbers. 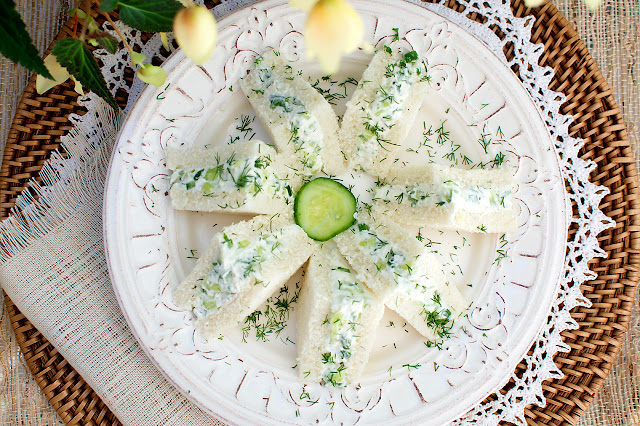 Would you believe
I had never made a cucumber sandwich?  I’ve eaten them at
brunches and luncheons and always enjoyed them so I don’t know what took
me so long.  Slow learner? I prefer to point to my delicious and bountiful cucumber crop being the inspiration. My personal twist on the traditional recipe was adding a little
crumbled feta to the cream cheese base. I think I would have preferred a thin-sliced whole wheat bread but wanted to stick with the traditional thin-sliced white for my first attempt to let the flavor of the filling shine. 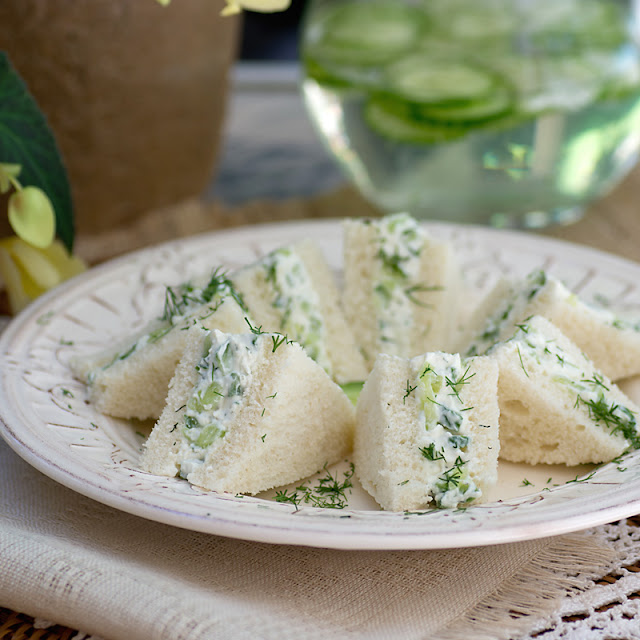 Have you ever had cucumber water?  They say that cucumber water is a wonderful detoxifier and we all know that drinking water is good for you.  It’s a simple process. Add cucumber slices to a pitcher of water and refrigerate. I made ‘stripes’ in the cucumber skin by running a dinner fork along the length of the cucumbers from top to bottom all around before slicing. The longer you allow the cucumber slices to ‘marinate’ in the water the better it tastes. Four hours would be optimal. You could also add a few lemon slices.  It’s very refreshing! 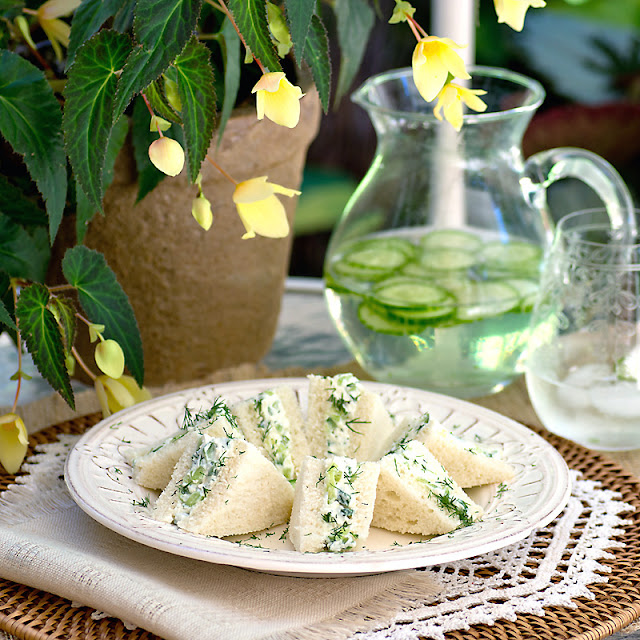 Next, is a Champagne Cucumber salad that I really enjoyed. Another recipe I had never tried before, preferring to go with the simple sugar and vinegar preparation of my refrigerator pickles. There are many great recipes to be found on the Net.  The one I liked the best was adapted from Ina’s which used of a splash of Champagne vinegar to which I added a little sugar for balance. The Champagne vinegar adds a delicious, fruity flavor to the cucumbers.  I love Champagne vinegar in salad dressings! 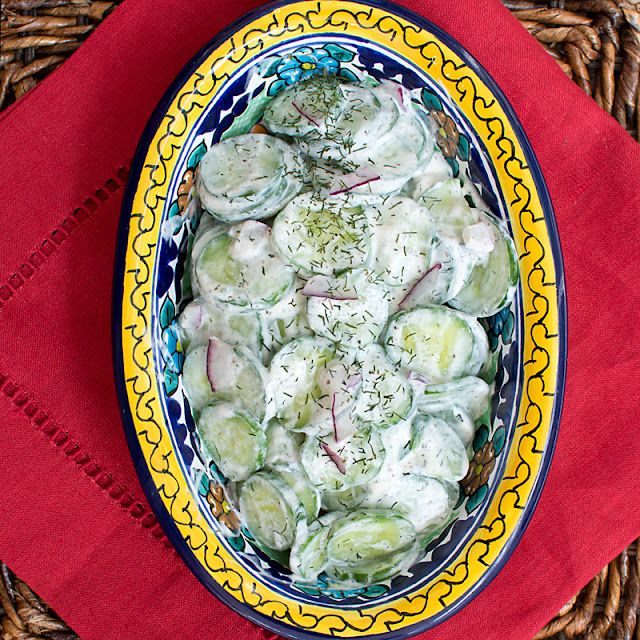 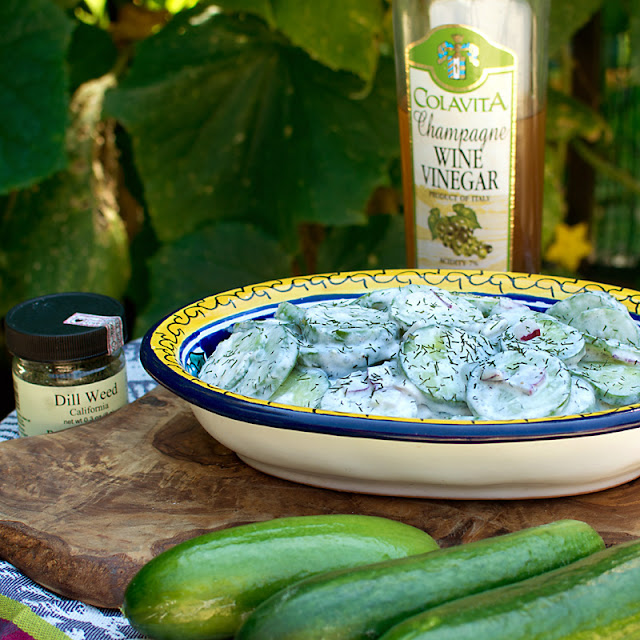 If you are faced with more cucumbers than you know what to do with, there is also a way to preserve cucumbers by making freezer pickles which will last in the freezer for up to a year.

Did you know that cucumbers are a valuable source of Vitamin K which is essential for bone health? Cucumbers
also contain high levels of nutrients known as cucurbitacins and
lignans, which early research indicates may have cancer fighting
properties. Way to go, Cucumbers!

While cucumbers are
draining, mix together the cream cheese, feta and mayonnaise in a medium
bowl. Blend thoroughly with a fork or use a hand mixer to blend. Add
the minced garlic, pepper, dried dill, and diced cucumbers. (I would not add any additional salt as the cucumbers will have retained salt from the draining step.) Spread on 4
slices of sandwich bread to desired thickness and top with remaining 4
slices of bread. Cut the crusts off of the sandwiches and cut each
sandwich into quarters diagonally, making 4 triangles each. Arrange
triangles on serving plates or platter with points facing up and
sprinkle with snipped fresh dill and serve.

Place the sliced cucumbers into a colander or strainer and place over a
bowl. Sprinkle with salt, toss and allow to drain for about 30 minutes,
tossing occasionally. This will remove much of the water content of
the cucumbers so the salad will not become watery. Turn the drained
cucumbers out onto a layer of paper toweling and pat dry.

Add
the cucumbers and remaining ingredients to a medium bowl. (I would not
add any additional salt as the cucumbers will have retained salt from
the draining process.) Toss well, cover and refrigerate for at least an
hour before serving (desirable but not necessary).