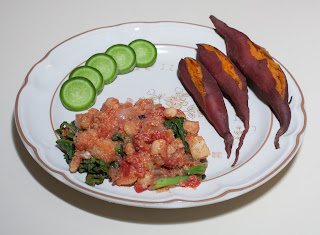 My daughter and I were out and came home with my wife and daughter hungry, so I got to work cooking right away. We picked up thin sweet potatoes from the farmers’ market this weekend, which I was anxious to cook.

I also got from the market a cross between kale and Brussels sprouts called kale sprouts; I described in March 2015 finding these in the market place as kalettes™  and really enjoyed them (today my family popped the raw ones in our mouths and loved them, stems and all). I’ve not found them more recently until I saw them this weekend.

I thought that I’d use kale sprouts for the main course. I wanted some sort of bean or maybe seitan to go with it and didn’t have any beans soaking. Luckily, for times like this, I have a few cans of chickpeas on hand. In order to bulk up the meal, I thought I’d use a tube of prepared polenta that I had on hand.

My wife recently returned from a trip to Bulgaria and found ample vegan options and great food choices. She brought back a spice called “savory”, which appears to be something like savory (chubritsa), a common table spice. I thought that I’d try seasoning with it. Here is what I did.

Sweet potatoes cook in 10-19 minutes of pressure steaming, but I went with 9 minutes, serving five of these small sweet potatoes for each of my wife, daughter, and me. They were great! In fact, they could have been done in 8 minutes. But I liked the organic way in which the sweet potatoes were gently burst open. And the sweet potatoes were light, much less dense than Japanese sweet potatoes (my favorite variety). Since they were organic, as we usually buy, I ate them intact, skin and all. I also served green luobo radish, from the farmers’ market as well.

Dinner was good! My one regret was with the kale sprouts; they were great, without any trimmed away, raw. They were also good cooked, but in the dish were just too big and should have been chopped. I liked the Bulgarian spice, which added a nice flavor that I can’t really characterize except maybe as a non-hot Mexican sage and pepper seasoning. The sweet potatoes were very good!

I wonder why I don’t cook with polenta more often. I should more frequently keep pre-made tube polenta on hand – but I should also make polenta from scratch. I think that I’ve only done that once, in June 2014, and it was both easy and very good. I should try a dish like this one, perhaps with chopped greens, polenta, and maybe a lot of mushrooms. A more complex tomato sauce would be good, maybe with green tomatoes cooked into it (hey, that’s another idea – combining cooked green tomatoes with tomato sauce).